An increase in the regulatory drive on noise and vibration in both crew space and underwater has led to a bigger focus on these areas by ship operators. 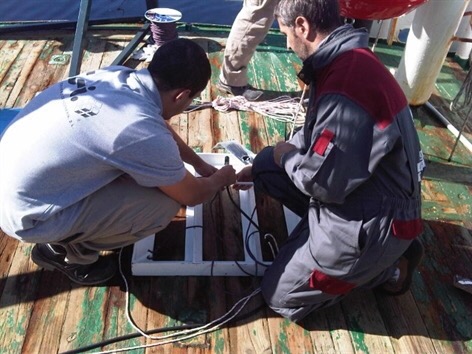 New and upcoming regulations have had an impact on noise and vibration on vessels.The mandatory Maritime Safety Committee requirement 337 (91) has been adopted by SOLAS for nearly every sea-going ship with a newbuilding contract from July 1, 2014 onwards. The previous directive in this area – IMO A.468(XII) – was only a recommendation. The new mandatory directive dictates that noise levels in crew areas on-board, including cabins, hospitals, messes, offices and recreation rooms, must be reduced by five decibels compared to the voluntary recommendation, if the vessel is above 10,000 gt.
This is one of the biggest focuses within noise and vibration currently for DNV GL. which DNV GL maritime senior engineer Stefan Semrau said that the background to the directive was that “if crews suffer noisy conditions, such as when trying to sleep at night, this can impact upon their work performance and increase the risk of making mistakes”.
This directive is particularly topical because many of the first vessels affected by this new standard are in the final stages of construction or have recently been delivered. DNV GL offers a noise prediction analysis service to its shipyards and ship operators to estimate the noise levels from machinery, including the propeller and engines as well as looking at how the crew areas are arranged and insulated. “If we find a situation where the sound requirements are not fulfilled, then we propose counter-measures such as optimising the insulation or isolating the noise sources,” commented Mr Semrau.
He said that the ship type most affected by the requirement are smaller container ships, just over the 10,000 gt mark. “These vessels have high engine power and propeller speed and so while they were already critical for the old voluntary standard, many would not meet the new requirements. We have given lots of advice in this area,” Mr Semrau said.
Underwater radiated noise has also become a stronger focus due to a combination of an increased regulatory drive and financial incentives.

The issue has recently attracted the attention of regulators and standards bodies. Although not mandatory, In April 2014 IMO published MEPC Circular 833 Guidelines for the reduction of underwater noise from commercial shipping to prevent negative impact on marine life.
Furthermore the European Marine Strategy Framework Directive (MSFD) has stated that underwater noise should be classed as a pollution. And from 2012 to 2015 the EU funded AQUO research project to focus on the impact of underwater noise and vibration from merchant ships on fauna. Shipowners and shipyards from Europe, Korea and the US gathered for this project. French class society Bureau Veritas (BV) was in charge of the final guidelines publically available on : http://www.aquo.eu.
It is against this backdrop of increased environmental threat and future regulations that BV introduced its class notation NR 614 – URN in 2014 and updated it last year. BV launched this voluntary notation to help ship operators and ship builders measure and reduce underwater radiated noise.

It is also on the back of this increased regulatory drive that RINA Services has launched a voluntary notation this year to be applied to commercial vessels that have mitigated underwater noise. Its Dolphin notation been developed for vessel operators which operate in sensitive marine areas and who want to demonstrate that they have acted to mitigate the impact of their vessels.

BV measurement department head Eric Baudin highlighted that interest had become more marked since two ports had launched financial incentives to encourage ship owners to reduce their underwater noise. Two Canadian ports, Port of Vancouver and Prince Rupert launched port tax reductions of 47% and 50% respectively to reduce underwater noise due to the endangered species off the cost of British Columbia, while in the US, Boston port is also considering it.
RINA Services marine chief commercial officer, Paolo Moretti highlighted the importance of the ports adopting these measures: “The most important thing is that they are bringing the problem to the attention of ship operators.”
Such incentives could spread to Taiwan due to the endangered white dolphin species living in its waters and Mr Baudin said that he was “optimistic” that financial incentives might be adopted by some European ports.

He explained that measuring and reducing underwater noise can be costly, which mean that previously it had not been a focus for ship operators. “Ship owners cannot gain a direct return on investment for these sustainable measures,” he said. But he pointed out that port incentives were changing this. “You can be environmentally friendly and gain a return on investment in two years.”
Another trend that is expected to bolster the drive to reduce underwater noise and vibration is the increase in expedition cruising, due to the sensitive areas that these vessels travel in. BV has already worked with some of the leaders in this market on the strongest grade of comfort class for noise and vibration for its newbuilds. While they have not yet opted for the underwater noise notation, Mr Baudin believes that

To meet the class notation and most effectively reduce underwater noise, Mr Baudin said that it was crucial to address these issues at the design stage. “The shipyard need to address the propeller, main and auxiliary engines at design stage because the choice of these components and of their architecture needs to be integrated to optimise noise and vibration levels.”
Furthermore, if the issue is not addressed at the start of the design process, it will cost more to make changes to reduce noise at a later stage.

Ways of combatting underwater noise levels include enclosing the engine in an acoustic box or placing resilient mounting around the auxiliary engines.

The propeller is often close to the cavitation, so Mr Baudin said that it was crucial to ask propeller manufacturers and experts to have a target of low noise right from the beginning of a ship contract. This second party engineering is now a key offering from BV subsidiaries TSI (a Spanish company specialising in vessel noise and vibration) and HydrOcean (which specialises in hydrodynamic digial simulation).