Modern windfarms have operated since the early 1980s, and noise complaints from a small number of families concerning one turbine in North Carolina are on record from around that time.

Details of this episode appear to have escaped the attention of the anti-windfarm movement for nearly 30 years, until a report resurfaced in 20132 and began to attract excitement on anti-windfarm websites as evidence both that the noise problem had been around for a long time and that the wind sector, government and NASA had conspired to suppress the information in the intervening years, despite the turbine being an experimental ‘downwind’ design that is not representative of current technology turbines. But with that one exception, there were no documented noise or health complaints throughout the late 1980s and 1990s. Noise and health concerns began to emerge in 2003, as we shall shortly describe.  Early opposition to windfarms in Australia and elsewhere concentrated almost entirely on NIMBYist ‘we don’t like the sight of them’ concerns, ideological recoil by climate-science deniers (for whom turbines were totemic reminders of green values), and confected alarm about the deaths of even small
numbers of non-endangered birds and bats. Health concerns were either non-existent or entirely marginal in these early years. We looked in vain for any pre-2004 Australian references to health and noise concerns in the parliamentary submissions and blog posts of anti-wind groups. There were 37 windfarms operating in Australia in 2010 when Peter Mitchell set up the Waubra Foundation and began to spread alarm about health issues. At only two of these farms were there any previous records of complaints about noise or health: at Toora in 2004, which we describe in detail below, and at Windy Hill in far north Queensland, which received a complaint from one person in 2001. If there had been more complaints in this era, anti-windfarm advocates would surely have done all they could to amplify these early examples in an effort to stress that noise had been an issue for residents living near windfarms for many years.

Extract from ‘Wind Turbine Syndrome -a communicated disease -by Simon Chapman and Fiona Critchon’. Click on the image below to download the book. 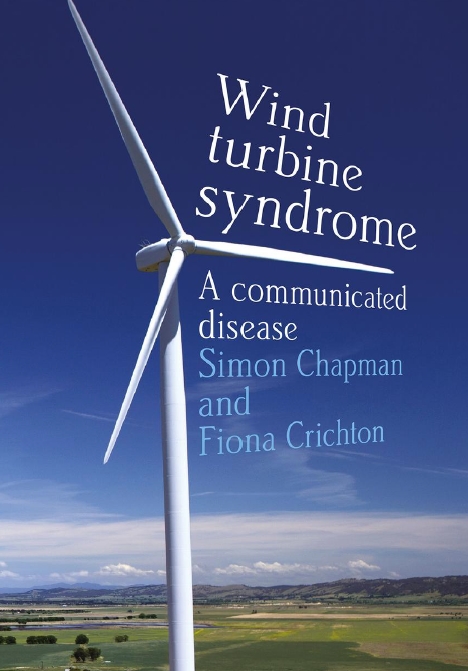