Thrill-seekers are being told not to scream or shout on a rollercoaster in Devon for fear of upsetting the local community.

People attending the Big Sheep park have to promise to stay quiet when they get on the new ride – ‘the Big One’ – after nearby residents complained about the noise coming from it.

The park has put up signs urging patrons ‘not to shout or scream’ because the site is located in a quiet area of the Devon countryside. 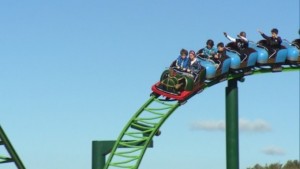 The owners of the park have spent four years fighting for planning permission before opening in time for this season.

The rollercoaster is the longest in Devon at 400 metres and can reach speeds of 30mph.

But local residents are concerned that the ride is too close to a local churchyard and ceremonies could be disrupted there.

The park has even employed a leading noise consultant at a cost of £40,000.

Additional efforts to reduce the sound from people enjoying the ride include creating a ‘noise bunker’ in the middle of the rollercoaster which involved moving thousands of tonnes of soil which acts as a sound barrier.

The park has come up with a novel way of attracting people to the rollercoaster and making sure they stay quiet too. It’s asking: ‘are you brave enough to ride the Big One and not scream?’.