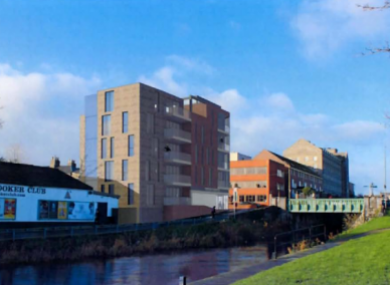 A FIVE STOREY apartment block development on Dublin’s Northside has been given the green light by Dublin City Council after being previously rejected by An Bord Pleanála.

Permission for the apartment block at Cross Guns Bridge in Phibsborough was overturned last August after a local pub objected about the potential impact the development would have on its business.

Dublin City Council had originally granted roofing contractor P Rooney Roofing permission to build a five-storey development containing nine apartments, as well as a ground-floor café, last March but this was overturned by An Bord Pleanála after a number of locals objected.

They said that its height was excessive, that it would negatively impact wildlife, that it was out of character with the area and that it would overshadow and overlook other buildings.

The developer intended to provide pedestrian and vehicular access to the apartments via Phibsborough Road and a rear lane called McGuinness’ Lane.

The laneway is situated between a snooker hall on Royal Canal Bank, a road adjacent to the Royal Canal, and back of The Bald Eagle pub on Phibsborough Road.

Cross Guns Snooker Hall and The Bald Eagle use the laneway for storing rubbish and the delivery of kegs, and while both businesses have access to it, P Rooney Roofing contended that it had right of way to use it.

In her report last year, planning inspector Sarah Lynch said that if a development had the potential for noise disturbance, it should include measures to reduce noise levels.

However, she noted that no such measures were submitted by the developer as part of its plans, saying this would be necessary to ensure that insulation was provided to ensure both the amenities of future residents and the economic viability of the Bald Eagle pub, which is adjacent to the site.

Lynch also found the development was contrary to the provisions of Dublin City Council’s Development Plan.

Under these plans, Dublin City Council’s Planning Department noted that there are no balconies, bedrooms, or living areas in immediate proximity to the pub’s outdoor seating area, and the more noise-sensitive spaces are located to the north.

“Nonetheless, given the previous reason for refusal on the site, the applicant should be requested to specifically address the issue of noise from the pub outdoor seating area, and its potential impact on the apartments at the east end of the site,” it said.

The Council also said that, given that the site is vacant, the reuse of land zoned for residential development in this case is “to be welcomed” and is in line with the Council’s Development Plan.

Lynch said that this gave minimum potential for daylight to enter the room, and that the window would also open directly onto the McGuinness’ Lane where rubbish was stored.

She said the use of the laneway was a legal matter and not one that the authority could determine, but found a number of planning issues relating to its location.

The Council, in granting permission for the revised plans, said the ground floor unit was elevated sufficiently above ground level and that the apartments had been redesigned to provide apartments to the north instead.

With reporting from Stephen McDermott