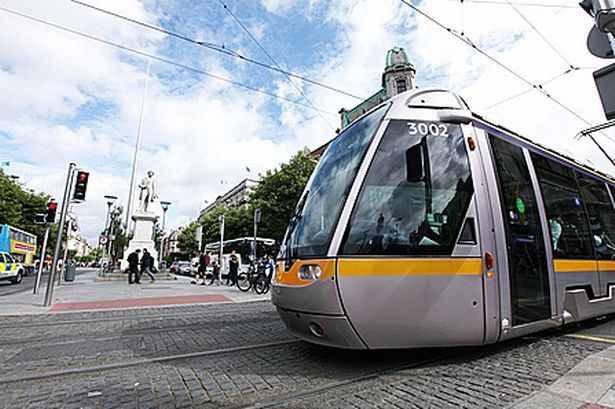 Ms Justice Laffoy on 5th March 2010 determined that the Luas Green Line “is being operated without infringing the comfortable and healthy enjoyment” of a particular house in Cambridge Terrace, Ranelagh and that the plaintiffs have not established any nuisance.

However, the Court determined that RPA had not complied with condition 28 of the LRO. This was the requirement to submit “daytime and nightime limits” for agreement by the local authorities. No limits were proposed, as, having monitored, the main sources were ambient noise outside the control of the operator. The Court acknowledged that the local authorities had approved the RPA approach, but determined that RPA was still bound to comply with the condition.

Accordingly the Court proceeded to consider whether there was in fact any nuisance. In finding there was none, Miss Justice Laffoy gave considerable weight to the LRO process and the predictions given in the EIS. She accepted RPA evidence that the levels measured at the plaintiff’s home were within the parameters of the EIS. She deduced that the NRA guideline standards were “best practice” at the time condition 28 should have been complied with (and it seems currently), expressly preferring that to the WHO Guidelines and British Standards relied on by the plaintiffs. Given compliance with the EIS predictions and the more rigorous NRA guidelines standards, she determined that the Green Line “is being operated without infringing the comfortable and healthy enjoyment of No. 3 that would be expected by an ordinary person whose requirements are objectively reasonable in the particular circumstances which prevail”.

She also concluded that no binding representation was made to deliver screening during the LRO process. Weighty legal submissions were lodged in thus case. The arguments revolved around the personal rights of the complainants against the RPA’s public functions as owner and Veolia’s obligations as operator of the LUAS system. In a nutshell, the Defendants relied upon the defence of statutory immunity where a nuisance claim is being brought against a statutory authority. The Plaintiffs contended that statutory immunity is unconstitutional where there is no provision for compensation. In response the Defendants contended that as they operate the LUAS in accordance with a detailed Ministerial Order which is a Statutory Instrument, no action for nuisance can lawfully lie against them.

The Plaintiffs’ submissions can be summarised as follows:

(a) the Plaintiffs have suffered an invasion of their constitutional rights under Articles 40.3 and 431 of the Constitution;

(b) the Courts and the State have a primary obligation to prevent invasions of its citizens rights under the Constitution;

(c) the tort of nuisance exists to protect and vindicate the Plaintiffs’ personal right to property and property rights in Article 40.3 and Article 43;

(d) it is not permissible to curtail such constitutional rights by implication in the interpretation of a statute or statutory instrument;

The Defendants’ submissions can be summarised as follows:

(a) no nuisance arises in fact or in law;

(b) the Defendants have complied with all of their legal and statutory obligations and are not operating the LUAS negligently;

(c) the proceedings are not properly constituted in that the construction and operation of the LUAS by the Defendants in the manner in which it has been constructed and is being operated is authorised by Ministerial Order which order may only be challenged by judicial review;

(d) the construction and operation of the LUAS by the Defendants in accordance with a Ministerial Order made following a full public inquiry does not as a matter of fact or cannot as a matter of law give rise to the nuisance complained of. 1 Article 43 states:

The Attorney General’s submissions in reply to the constitutional issues can be summarised as follows:

(a) There is no challenge to the constitutionality either of the Act or the Order in the instant proceedings.

(e) There has been no constitutional challenge either to the legislation or the Order authorizing and mandating specific and detailed works in the instant proceedings. The Order and Act must in consequence be deemed valid and constitutional for the purpose of the proceedings;

(f) As such, non negligent compliance with the authority and obligations contained in the Act and Order is, by definition, lawful.

(g) The carrying out without negligence of the acts specified in the Transport (Dublin Light Rail) Act 1996 and the pursuant Order2 are incapable of constituting the civil wrong of nuisance. The common law of nuisance incorporates this concept by recognising the defence of statutory authority. Article 15 of the Constitution enshrines the Oireachtas as the sole and exclusive law maker. The provision under law for the carrying out of the works constitutes an indemnity per se. This principle adheres today.

(h) The non-availability of compensation is a factor which could only go to the constitutionality of the Statute or the Statutory Instrument, which have not been challenged.

(i) The Act and the Statutory Instrument are in any event proportionate in their balance and in accordance with the constitution; they represent a minor infringement of the rights which attach to private property in the interests of the common good and as such by definition do not constitute an unjust attack. Transport (Dublin Light Rail) Act 1996 (Line B – St. Stephen’s Green to Sandyford Industrial Estate) Light Railway Order 1999

(j) The non-availability of compensation cannot in any other way impair the entitlement of the Defendants to rely on the Defence of statutory authority.

(k) The Plaintiffs may gain protection for personal property rights insofar as the Defendants fail to establish that they are not negligent in the works and operations carried out by them in accordance with the Statute and Order. A number of principles were discussed over the course of the 16 day hearing: The Proportionality Principle In Hanrahan v Merck, Sharpe & Dohme (Ireland) Ltd3 , the Supreme Court stated that the tort of nuisance “may be said to be an implementation of the State’s duties under those provisions as to the personal rights and property rights of the citizen”4 and the vindication of those rights extends as far as being: “clear from the authorities on the law of nuisance that what an occupier of land is entitled to as against his neighbour, is the comfortable and healthy enjoyment of the land to the degree that would be expected by an ordinary person whose requirements are objectively reasonable in all the particular circumstances. It is difficult to state the law more precisely than that…” In the Smyth case, the Plaintiffs contended that the operation of the LUAS could not subjugate their right to the normal enjoyment of their home and to a proper and uninterrupted night’s sleep which was allegedly denied to the Plaintiffs because of the noise caused by the operation of the LUAS.

However, it was recognised that the enjoyment of personal property rights is not absolute. The State may as the occasion requires, limit by law the exercise of these rights, with a view to reconciling their exercise with the exigencies of the common good. In deciding in any given instance whether a right has been validly abridged, Costello J, as he then was, stated in Heaney v Ireland5 : “In considering whether a restriction on the exercise of rights is permitted by the Constitution, the Courts in this country and elsewhere have found it helpful to apply the test of proportionality, a test which contains the notions of minimal restraint on the exercise of protected rights, and of the exigencies of the common good in a democratic society. This is a test frequently adopted by the European Court of Human Rights (see for example Times Newspapers Limited v United Kingdom [1979] 2ECHR 245), and has recently been formulated [case of Chaulk v. R. [1990] 3 S.C.R. at 1303] by the Supreme Court of Canada in the following terms: the objective of the impugned provision must be of sufficient importance to warrant overriding a constitutionally protected right; it must relate to concerns pressing and substantial in a free and democratic state; the means chosen must pass a proportionality test. They must:-

(a) Be rationally connected to the objective and not be arbitrary, unfair or based on irrational considerations;

(b) Impair the right as little as possible;

(c) Be such that their effects on rights are proportional to the objective; The Defendants and the Attorney General argued that the carrying out of a public inquiry as was done prior to the approval of the development of the LUAS was in many respects a more appropriate approach to achieving fairness among all interested parties than the conduct of individual nuisance actions. They argued that the abatement of one man’s nuisance may be the creation of another’s. Noise screens erected in the interests of one party may be the blocker of the view or the reflector of further noise towards the premises of another party.