The trial of a Kerry dairy farmer accused of murder will hear how he had “intentionally rammed” the car of a neighbouring landowner with the large prongs of a teleporter on a country road.

The incident caused severe damage to the car and “catastrophic injuries” resulting in the death of the tillage farmer a short time later, a jury was told on Wednesday.

Michael Ferris (63), of Rattoo, Ballyduff, Co Kerry, has pleaded not guilty at the Central Criminal Court in Tralee to the murder of John Anthony O’Mahony (73) at Rattoo on April 4th, 2017.

The presumption of innocence was stressed at the opening of the trial.

Senior counsel for the DPP, Patrick McGrath, outlined the “anticipated evidence” to be put before the jury over the next two weeks.

He said the jury members would hear how just before 8am on April 4th, 2017, Mr Ferris was driving a teleporter, “with large prongs” extended, on a country road.

They would hear he “intentionally rammed” the blue Peugeot 508 car driven by Mr O’Mahony “on a number of occasions”, said Mr McGrath.

The events occurred in the townland of Rattoo, in the village of Ballyduff, not far from Listowel, on a country road off the main Tralee to Ballyduff route.

The dead man and his brother had bought 100 acres of land in Rattoo, in the late 1980s, initially for vegetable growing. But in recent years they were using it for tillage.

Mr O’Mahony was a bachelor who lived in a townland not far from Rattoo and had “a very regular routine” , the jury was told.

Over the years there appeared to have been some falling out between Mr O’Mahony and Mr Ferris and they avoided each other.

Mr Ferris, a dairy farmer with about 90 acres, farmed with his brother and was of good health and active. He would be described by neighbours “as a quiet man, an obliging man and also a man of routine”, said Mr McGrath. 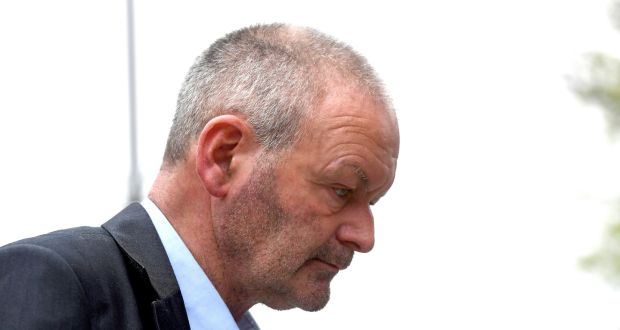 Mr O’Mahony and Mr Ferris had not spoken for a period of time.

“The deceased did not appear to be the easiest of men. He was an awkward man and could be a difficult man and a man who had fallen out with a number of neighbours,” said Mr McGrath.

The jury would also hear that Mr Ferris went to neighbours on the morning in question and said, “Mahony is gone”. When gardaí from Listowel arrived on the scene they found the severely damaged car. Mr O’Mahony was in the car with serious injuries to his head and body and it was obvious there had been a violent incident.

Gardaí observed debris along the road for between 50 and 70ft. The teleporter was parked alongside Mr Ferris’s milking parlour and there appeared to be blood on one of the forks and blue paint.

An outline of what Assistant State Pathologist Dr Margot Bolster will present was also given to the jury by Mr McGrath.

The jury was told to put aside prejudice and sympathy in “this very serious case”.

Brendan Grehan SC, for Mr Ferris, said there would be no issue with the crime scene, the forensic analysis of the teleporter or the arrest of Mr Ferris.

A crow banger used by the deceased tillage farmer would go off every four minutes and 26 seconds at key tillage periods to frighten off crows and pigeons, and was so loud some neighbours wore ear protectors, a witness later told the court.

Prosecution witness Mairead Walsh, who lives on the lane to Rattoo round tower, and to whose home Mr Ferris went on the morning of April 4th, saying “Mahony was gone” and asking her to call gardaí, described the accused as “lovely, a great neighbour”.

They would meet most days on the lane and stop and chat and he would always arrive with something, with eggs or vegetables and if she were baking she’d drop scones and stuff up to the Ferris’s house, she told Mr McGrath.

There had been a dispute “years before” she came to Rattoo between Mr Ferris and the deceased, she believed. Five years ago, Mr O’Mahony became “more peculiar”, she said.

When he brought the banger closer to their house, it was like a gun going off and her husband approached him about it.

She warned her children not to allow their ball to go into Mr O’Mahony’s field: “In the last few years, you’d just be careful.”

In cross-examination by Mr Grehan, Ms Walsh agreed Rattoo was a scenic location and at the end of the country road was one of the best preserved round towers.

The banger had been placed against a wall, about 120 metres from their house. The dead man knew they had a problem with the noise and he could just as easily have moved it, but “he was no way accommodating”.

Asked if she feared the dead man, she said “yeah” and, breaking down in tears, recalled an incident while on the lane when the Mr O’Mahony was standing at his gate.

“He shot right over my head and I got really scared,” she said

She challenged him and he just shouted abuse at her. “It was his way or no way,” Ms Walsh also said of the deceased. The Michael Ferris she knew was “gentle and soft”, she answered Mr Grehan.

Everyone had got on well on the lane including Swiss national Michael Schumacher who owns a holiday home at Rattoo.

Patrick Walsh, husband of Mairead Walsh, said the crow banger had been set up by Mr O’Mahony, on the Thursday, six days before April 4th,

Mr Walsh said he told Kerry County Council that the banger was going “every four minutes and 26 seconds” and was told by officials to keep a log. In 2013, the deceased had fired “a gun over our heads” as he and his wife and daughter passed him on their walk.

Describing the effects of the banger, Mr Walsh said: “You’d have to live alongside a banger to understand that. It’s horrendous. It would follow you everywhere up to your room, out in your yard, it’s everywhere”, he said referring to the echo since it had been placed against the wall of a building near their house, rather than in the corn field where it had been.

Asked why it had been placed against the wall by the deceased, Mr Walsh said this was to reflect the noise.

He also said he was concerned about Mr O’Mahony and feared for his children. The trial continues.