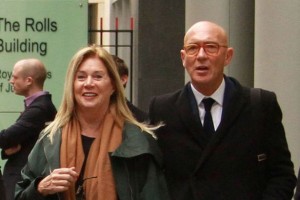 A super-rich couple who claimed ‘excruciating’ noise from helicopters stopped them from selling their £4m home to Strictly presenter Tess Daly, have scored a landmark High Court victory.

And today a top judge agreed with them, ordering the operators of Buckinghamshire’s Bickerton’s Aerodrome to cut the racket or pay almost £600,000 in damages.

“I found the noise excruciating in the garden and clearly noticeable to a significant degree within the rooms.

“It was simply impossible to have any kind of conversation or do any kind of activity in the gardens when the helicopters were there”.

“From the garden, I am able to see the tops of the helicopters bobbing up and down on the boundary as they carry out their manoeuvres,” she said.

“It is virtually impossible to enjoy the garden whilst the helicopters are hovering.

“It is too distracting to read a book and is embarrassing to have guests around as conversation is impossible”.

The judge said Ms Stenson’s account was “compelling” evidence that the helicopter noise amounted to a legal “nuisance” that had to be stopped.

He issued an injunction against Bickerton’s Aerodromes Limited, restricting it to only two 15-minute weekly training sessions close to the boundary.

The racket was so dreadful that the judge said he would have awarded Mrs Peires, who brought the case, £583,000 in compensation.

But the return of peace and quiet to her home – Shepherd’s Holt, a six-bedroom mansion in leafy Denham, Bucks – was more important to her than the money, the court heard.

The judge said of Mrs Peires: “Her approach has been one of reasonable restraint; the aerodrome’s approach regrettably has not been the same”.

And, urging the operators of the 100-year-old airfield to listen to her concerns in future, he added: “This is just plain good neighbourly conduct”.

The couple ploughed £1.5million into revamping Shepherds Holt soon after they bought it for £1.275 million in 2006.

And Mrs Peires, 69, earlier told the judge: “We made that house exactly the way we wanted it. We wanted to live there for ever”.

But their dreams soured when relaxing in their 2.5-acre garden and afternoon tennis parties had to compete with the roar of helicopters from the aerodrome.

The couple had no objection to the “low hum” of aviation, but said the noise of choppers taking off and landing on a “ramp” just yards from the boundary was unacceptable.

She said the “loud drumming and shattering” penetrates into the drawing room and master bedroom even with the double-glazed windows tight shut.

They ended up putting Shepherd’s Holt on the market just five years after they bought it as the noise was “driving us crazy”, Mrs Peires told the court.

Tess Daly and Vernon Kay had been very keen on buying the property – until they stepped out into the garden, Mr Peires told the judge.

The celebrity couple were “left horrified by the noise” during their second viewing and were visibly shocked, the court heard.

“Tess Daly said later that they loved our house but that they couldn’t live with those helicopters”, the businessman added.

Another potential buyer put off by the helicopters was TV sports broadcaster, Gabby Logan, the court heard.

The couple said she had only made it as far as the garden gate before she was “put off by the noise”.

Mr Peires, who made his fortune in the travel industry, said they ended up letting Shepherd’s Holt between 2013 and 2015.

And he told the judge: “Our main request of the court is to help us live in peace.”