For decades the Hamptons have been the summer escape of choice for heat-frazzled New Yorkers.

Tens of thousands make the hundred-mile pilgrimage east from the city to lounge on the sandy beaches, linger in the pretty villages and luxuriate in the slow-paced lifestyle.

In recent years it has become a magnet for the rich and the famous; Steven Spielberg, Jennifer Lopez, Scarlett Johansson, Paul McCartney, and Robert De Niro all own homes in the area. 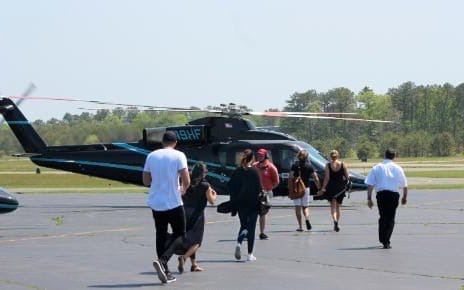 Beyonce flies in by private jet, and Rihanna by helicopter. Matt Lauer, the highest-paid news show host in the US, even has his helicopter rides written into his NBC contract.

But now residents of one town have had enough.

East Hampton homeowners are engaged in a bitter battle over noise pollution from the stream of summer jets, seaplanes and helicopters, and it is a fight they have taken to the Supreme Court.

Over 24,000 complaints were registered last year – a figure expected to be exceeded this year, due to the increase in popularity of “low cost” helicopter shuttles from Manhattan, such as Liberty Helicopters and Blade.

A one-way trip with Blade, which launched in 2015, costs $695 and take 20 minutes, avoiding hours spent sitting in the infamous July and August traffic jams.

“The choppers — you can almost feel them coming before you hear them,” said Patricia Currie, who lives in Noyac, seven miles from East Hampton airport.

“Very slowly, it gets louder and louder. It gives you time to dread the thing. There is a feeling of dread even though you know it’s going to pass.”

Adam Irving, who spends his summers on Orient, eight miles from the airport, told Fox News that the noise was a serious disturbance.

“The entire eastern end of Long Island has a very low ambient noise environment, so when these things fly over, it is very pronounced,” he said.

“The total noise per flyover lasts two-and-a-half to three minutes. First you will feel the low-end bass, then the flop-flop noise.

“You can feel it in your body and it rattles your walls.”

The town thought it had addressed the issue when it enacted laws in April 2015 barring flights between 11pm to 8am, and placing a once-weekly limit on aircraft deemed noisy, according to FAA noise standards, between May and September.