Lullaby for electric cars: Scientists create a ‘tune’ that mimics the sounds of a combustion engine to help parents get their babies to fall asleep in ‘silent’ battery-powered vehicles

A lullaby for the electric car has been created by scientists to mimic the sounds of a combustion engine and help babies fall asleep during a drive.

More than half of parents say they take their young children out in the car to help them nod off, a study by Nissan found.

They say the soothing combination of motion and sound is what helps the infants drift off – but the sound part isn’t available for owners of electric vehicles.

To solve the issue, sound designer and sleep coach Tom Middleton created a lullaby which imitates the hum of a petrol or diesel engine.

He has created an album of five three minute tracks made from a combination of white, pink and brown noise that creates a ‘hypnotic soundscape’.

The tracks on the album include sounds heard in any normal petrol or diesel engine drive – keys, indicators, accelerating and braking.

It was recorded in a special acoustic chamber in Bedfordshire, England using a Nissan Qashqai and a Nissan LEAF to gather the sounds.

The designers say parents can then play the album to their children in the car while they are driving around trying to get them to fall asleep.

One of the biggest worries new parents have is how to get their baby to sleep, according to parenting expert Elizabeth O’Shea.

‘Parents soon realise that taking a drive in the car or ‘dream driving’ is a great way to get a baby or young child to nod off.’

She said parents with electric vehicles have found that the motion alone doesn’t seem to work, as the ‘near silent’ battery-powered vehicle doesn’t do the trick.

‘How interesting that it’s the sound frequencies of a combustion engine, rather than the movement, that helps children fall asleep.’

Research by Nissan found parents spend an average of 20 and 25 minutes on a ‘dream drive’, covering up to five miles on a single outing.

This works out at about £33.5 million per year on fuel at current prices used by all parents just trying to get their infant to sleep.

In an electric car, with costs of about 3.7 p/mile it would cost about £10.9 million in electricity and see the average family reduce 154lb of CO2 emissions, Nissan says.

Seven out of ten parents surveyed by Nissan said they thought it was just the motion that helped babies drift off to sleep in a car, but research suggests the noise of the engine is a major contributor.

‘This creates an orchestral soundscape that is especially soothing and comforting to young children.’

With this in mind Mr Middleton and his team recorded a range of interior and exterior sounds from a Nissan LEAF and Nissan Qashqai in a semi-anechoic chamber.

They found a very different sound profile between the leaf and the Qashqai.

The final sound profiles married the two vehicles, but included a mixture of common noises for any drive. 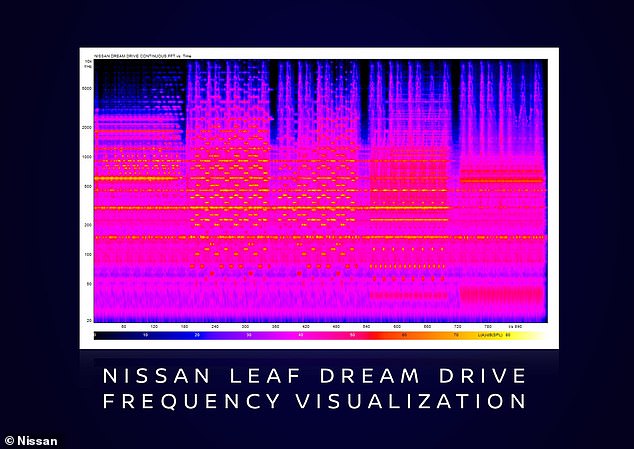 Researchers say when played over a car stereo in an electric vehicle it can have the same impact on a sleeping baby as a drive in a petrol powered car.

‘The Nissan Dream Drive depicts the future of using sound and other sensory elements to improve people’s lives,’ said Ari Peralta from the sound design team.

The Dream Drive lullaby can be downloaded for free on iTunes, Apple Music, Spotify, SoundCloud, Deezer and Amazon Music.