People living under flight paths at Dublin Airport have revealed their daily nightmare as negotiations are planned on limiting the noise impact of a second runway. 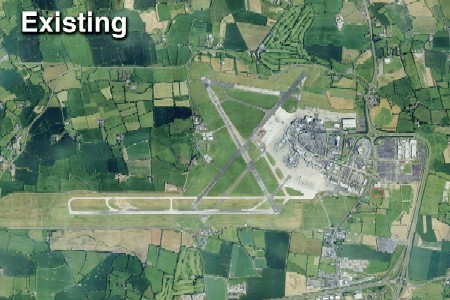 Aviation chiefs have offered to buy 40 homes, believed to be in the St Margaret’s area 2-3km from the airport, ahead of the planned 320 million euro expansion in 2020.

While that deal is expected to stay on the table for a year, insulation, potentially involving triple glazed windows, will also be suggested for hundreds of other properties including schools.

Helena Merriman, spokeswoman with the St Margaret’s Concerned Residents Group who has lived in the area for 40 years, said the 30 home owners in her association are devastated but have no choice. “We are devastated that our homes are affected but we have to work with the airport and the planning authorities to come to an agreement,” she said. “You can’t stop progress.”

Aviation chiefs identified houses for purchase by assessing exposure to noise from planes over 90 days of the airport’s busiest months from June to September.

Some of the homes worst affected by current flight paths are the Newtown Cottages in St Margaret’s.

“Under the existing runway and flight path, if you stand there you can’t have a conversation in your garden,” she said.

“The residents can’t listen to the news. They have to turn the volume up.

“Nobody is outside walking or just out. That was a vibrant community. Previously, people would be out with the dog or in their garden. That does not happen.

“It is very negative.

“If you are having a conversation with someone at the gate you have to stop. You are talking about every couple of minutes, but it’s particularly in the summer time.”

Residents, some of whom have been in the area for three generations, fear that a second flight path, increasing frequency, growth in long haul services and the number of larger aircraft flying in and out of Dublin would compound the problem.

They include a ban on take-offs or landings on the new runway from 11pm to 7am, affecting two of the busiest hours of the day, and restricting the average number of flights during those night time hours to 65, even though the airport is already operating 99.

On the coastal side of the airport, Portmarnock and its population of nearly 9,000 people are also deeply affected by the existing flight path.

Pat Suttle, chairman of the local community association, said the biggest problem was agreeing when flights should be allowed to operate when the second runway is built.

Mr Suttle described the impact of being so close to planes on their final approach to Dublin – about 6km from the airport and a minute and a half from touchdown.

“You can nearly see the scrapes on the tyres of the landing wheels,” he said.

“The noise is very, very intrusive.”

Mr Suttle warned that questions may be asked about using a planning permission that is nine years old in an industry that changes rapidly.

“More than likely we are going to have flights from Beijing, New Delhi, Singapore, South America – the whole scene has changed. What time do the people on those flights want to land?” he said.

“There is also how this will affect schools.”

The Portmarnock Community Association meets airport chiefs on Monday and the St Margaret’s group will meet them separately to open negotiations on the buying of homes, insulation proposals and limiting flights.